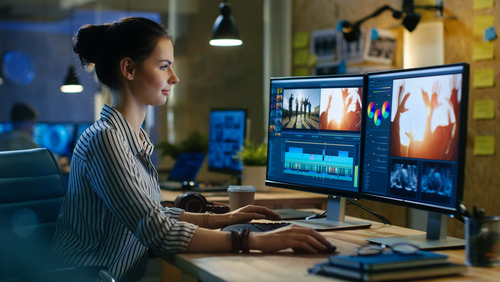 Whether you’re taking graphic design courses from a school with accreditation or you’re simply learning how to use the GNU Image Manipulation Program at home, you should know about using extensions. Gimp is a free and open-source image-editing application, similar to Adobe Photoshop, and compatible extensions include plug-ins, add-ons and scripts that allow you to extend the functionality of the software.

Some of the most popular extensions are G’mic, InsaneBump and NormalMap, a texture-creating plug-in included with the Gimp FX Foundry package. If you’re using Gimp mainly for photo editing and 2-D artwork, you may not use the NormalMap plug-in as it’s intended for 3-D artists working with textures for models and animations. The expansive and versatile G’mic plug-in has hundreds of filters and effects for 2-D images, such as photographs and artwork, and you can use it to convert photos into artistic, stylized images for logos, banners and animations. One of the most useful features of Gimp is its ability to create Gif animations from an unlimited number of images in a sequence, and the G’mic plug-in allows you to process every picture in the series for a unique and original end result.

How to Install and Create Gimp Extensions

Whether you’re using Linux, Mac or Windows, installing Gimp extensions is as easy as copying the file or folder to the Gimp directory in your Home folder and then restarting the program. You can access all scripts and add-ons from the tool bar at the top of the window. If you’re a graphic design student, you may be interested in writing your own plug-ins and scripts using the Scheme or Python scripting languages. Plug-ins must be written in Python while scripts can be written in your choice of Python or Scheme. Most users opt for Python due to its familiarity and relative simplicity.

The Gimp scripting language is called Script-Fu when Scheme is used and Python-Fu when Python is used. All functions built into Gimp can be accessed from your script by calling them from the Procedure Browser, accessible from the Help menu at the top of the screen. These handy procedures allow you, for example, to desaturate, colorize or sharpen your image by programmatically calling one of these functions from your script, and the end result will be the same as if you had chosen one of these options from the tool bar.

Getting the Most Out of Your Gimp Extensions

While these scripts and add-ons can make using Gimp more convenient, their real power is utilized when you apply them to an entire folder of images using a batch operation. With this option, you can process an unlimited number of images using the same filter or procedure, and the entire operation will be carried out without any additional input from you. You’ll be able to start the batch operation and walk away from the computer as your processor converts, for example, an entire folder of pictures into a Gif animation with your choice of artistic filters applied to every frame in the sequence.

Graphic design can be a great career choice if you have some programming knowledge to go along with your artistic skills. The first step to making your way in the world of graphic art is finding a two-year or four-year program with accreditation, but you can get started on your own by learning about Gimp software and extensions right away.