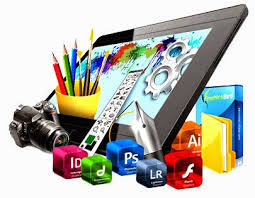 Graphic designers are responsible for all the print and Web graphics you see in advertisements and publishing and in modern times, these designs are created almost entirely on computers. Graphic design software falls into a large number of categories, and each category has many different choices and subcategories. Artists use 2-D raster and vector graphics editors to compose layouts for ads, billboards and magazine spreads, and typographers use font-making software to create all the TrueType and OpenType fonts used by everyone from Hollywood film editors to the average computer user at home. They also use font-management software to keep track of the thousands of fonts installed on their computers.

To get started in graphic design, at the minimum, you need a raster graphics editor, such as Adobe Photoshop, and a vector graphics editor, such as Adobe Illustrator. While there are free alternatives to these programs, they lack some of the features and smoothness of the proprietary software. Free and open-source software (FOSS), such as Gimp and Inkscape, allow beginning designers to learn the basics without investing any money. They’re also excellent programs in their own right, and they can be used to create designs every bit as professionally polished as Photoshop or Illustrator. The difference is that FOSS applications aren’t used in professional design workflows.

Graphic designers with illustration skills often use drawing tablets to lay down sketches or add color to designs. Tablets can be used in a variety of ways; they aren’t limited to drawing with a pen stylus. For example, 3-D designers use tablets for sculpting a base mesh or manipulating a 3-D scene. There are also large drawing tablets with built-in touch screens used for drawing or sculpting directly onto the computer screen. These devices are part of the Wacom Cintiq line of tablets, and designers use them with software such as CorelDraw or Adobe Painter for 2-D artwork or with Z-Brush, Maya or Blender for 3-D designs. It’s not necessary to buy a touch-screen drawing tablet at first, but a smaller, less expensive tablet without a touch-screen is recommended. Additionally, 3-D software is not used by most graphic designers, but learning 3-D modeling, rendering and animation is a valuable skill in such a crowded occupation.

Font-creation software, such as TypeTool and Fontographer, is used to build fonts, letter by letter, by dragging nodes on vector paths. Fonts are made from vector graphics, similar to the SVG files created by Adobe Illustrator and Inkscape, which is why fonts can be infinitely scaled up or down without causing distortion. Typographers use this software, as well as raster and vector design software, to create and set fonts for advertisements, signs, magazines, album cover art, book covers and any other 2-D space that needs to be covered with art and text.

To manage all these font files on their computers, typographers use font management software such as FontExplorer and Suitcase. These programs allow typographers and graphic designers to quickly install and uninstall fonts so that they can more easily choose a font for a design.

The competition for graphic design jobs is strong, but with the proper computer skills and software, you can stand out in this bustling field. Learning how to use software is a necessary skill, but learning the principles of good design is even more important.